Do you have house sparrows living in the atrium and the food court of your local mall?  We also have them at Home Depot, in the garden section.  So today, I was very surprised to step into the campus train station to hear the same sound of bird chirps that resonate in those large structures.  As I headed up the stairs, I soon saw why.  There was a female House Finch, fluttering and flying at one corner of the stairwell.   I didn’t want to leave her there.  (Had she been a House Sparrow or a European Starling I could have cared less.)  Unlike Home Depot and the mall, there’s no greenery, no food court, no food source.   I tried cooing, chirping, and clucking to her with my hand extended, hoping hope against hope she would just land on my hand and I could carry her to safety.

She had other plans.  She looked at me; fluttered away and looked again.  After a few minutes of this, she decided to begin flying further up the stairwell.  So I followed.  Every pause, I would do my best to speak House Finch and reassurances to her.  So post by post, window by window we traveled through an empty passage way of light and glass.  She darted behind piping, balanced on beams, peered out the panes.  We got to the second stairwell.  She was so close to freedom, but then she flew back down the tunnel.  I weighed my choices of remaining with her, or going on to class.

Like the white rabbit, I was already running so very late, so I scurried off to class.  As I went, I mused about how following a bird felt much like falling down the rabbit hole.  Much more sensible than naming a bird Rabbit, I named her Alice.  I reasoned that if she was going by the time I returned, then she didn’t need my help, but if she was still there, I could help her when I had a slightly larger window of time.

Persistent little bird, she was still there, beating away at the glass holding her prisoner.   No Red Queen to keep her running in place to keep up, just an invisible wall of glass.  (A barrier of nothing seems very apropos of Carroll).   As I approached I could see a male House Finch mirroring her antics and distress on the other side of the glass.

I only snapped a few photos of her as it seemed cruel to stand there documenting her distress with the perfect photo while she beat away her energy on the glass.   As I stood there, talking to her, a second human appeared.  Alice’s plight resonated with her and we discussed how to best return her to her home.  Catching her and communicating with her clearly weren’t working.

We headed up to the walkway and tried to open the windows, but the windows required a special key.  The broken door at the East Entrance had been repaired and would no longer stay open.  She pulled out a notebook and decided to try fanning the bird down the West Stairwell towards the closest exit.  For lack of anything else to do, I ran down to open the door.  She got Alice close, when Alice turned and flew back up to her corner.  I took a risk and took out the binder containing the notes for all my classes this semester and used it to prop the door open and headed up to help herd Alice down the stairs.

Upstairs, I had nothing to fan with as my binder was below.  To prevent her from flying over us, I began to climb the railing to block her from flying above our heads.  Alice panicked, flew above my head, and I stumbled, knocking my sunglasses off in surprise.  (That would have been photoworthy.)  So not the best idea. Next, I took off my sweater and hoped that unlike bulls, birds avoid red.  Or if she preferred red, I could catch her in my sweater and carry her to safety, without breaking a wing or a sweat.

The other student began fanning Alice down the rabbit hole, and I stood at the top, helpfully bonking myself in the head with the zipper as I waved the sweater about like a banner.

We navigated Alice to the entryway where she selected the corner opposite the doors and returned to pummeling herself at the glass.  I walked down and waved my sweater at her encouragingly, trying to guide her towards the open door.  She panicked and flew over me and up to the landing.  We retreated upwards, sneaking beneath her to not scare her further upwards.  In addition to the notebook fanning, I began to gently toss my sweater upward to entice her to move from her hiding spot on the beam.   We navigated her down again.  I crept out the door, retrieving the binder, closing the open door, and propping open the door closest to her.   After several more minutes of dancing back and forth with Alice, we then herded her out the door and into freedom.

Then, I gave up traveling for spring break.  It stopped snowing.  This year, I hope to get in a few day trips during my furlough.  But it snowed this year, suggesting maybe it’s my outdoor/birding attempts that bring out spring snows.   Which means, I have been cooped up with no birding for a week now due to prepping for midterms and presentations!  Wanted break my birding fast with an afternoon outing either Thursday or Friday afternoon, but snow has postponed those plans.   Was also supposed to go with Dad to Wild Birds Unlimited so we can do some grandiose landscape to attract more birds each season.  Snow has also postponed those plans.  Mind you, I was going stir crazy last weekend without an outing.  Prognosis is not so good!

So hopefully birding next week, fit in around my work-schedule.  No sunrise birding unless it’s Wednesday.  But I might have time to checkout Sandy Hook or the Meadowlands.  I’ve heard lots of good things about birding in the Meadowlands, particularly Disposal Road.  But visiting the Meadowlands is more convenient  as I drive through there frequently, so perhaps I should head out to Sandy Hook on the ocean.  I birded there once, three years ago. 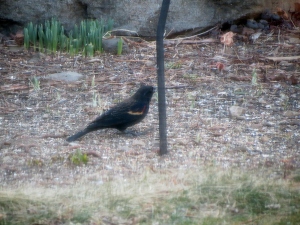 Immature Red-winged Blackbird investigates the feeder in hopes of food.

Field season in Warren county for American Kestrels kicks off Tuesday, Sussex date hasn’t yet been finalized. It should be before the month is out.

Haven’t seen the Wood Duck again, but I did have a Red-winged Blackbird checking out the feeder the other day.  I’m assuming it’s immature because it has the epaulets, but it’s back isn’t fully black.  (You can see a hint of red.)  When I found him, he was actually up on the feeder.

As I walked back to my car on Tuesday night following class I was very excited to hear vocalizations coming from the construction area/playing fields.  Considering the time and the season, I was hopeful it was the American Woodcock.  When I had a chance, I verified on ebird that the American Woodcock had returned to the area. I haven’t heard woodcocks since I was an undergraduate crossing Skelley Field.   And that’s been years!   I listened to the vocalizations on Cornell’s All About Birds site.  Vocalizations aren’t my thing – I have permanent audio amnesia, so songs and calls are challenging.  Cornell’s vocalization file seemed promising and so I was filled with hope.

Alas, it was not to be.  Arriving on campus Wednesday morning, I learned the true identity of the noisy, new arrival.  Approaching the soccer fields I found a standoff between the disinterested soccer team beginning practice and the indignant Killdeer protecting the goal.

So February wrapped up with a last minute addition to the month list of Killdeer for a total of 5o species, and 34 checklists and a new lifebird, the Monk Parakeet.  Bird sighting I was most excited about:  American Robin.  Seems silly, but they portend spring for me, so it was super exciting to see.  Most vindicated sighting of the month: Brown Creeper.  I knew they had to be around the house, it was only a matter of finding it and I did.

Now, back to studying for Tuesday’s exam!

Spring break is approaching!  So hopefully I will get a chance to get out and bird more as the migrants begin arriving.