The SICB conference started on January 3rd. However, as it was only registration and that wasn’t until 3, this meant we had hours of birding before us. Tara and I decided to start at the southern most point of Loxahatchee closest to Coral Springs and work our way north to West Palm Beach where the conference was being held.

Loxahatchee was recommended by both our ornithology professor and also by Olin Sewall Pettingill’s Guide to Bird Finding, which was referenced by Kenn Kaufman in Kingbird Highway!  However Kaufman referenced the first edition, while I was making do with the second, published a bit after Kaufman’s go at a big year. (The guide is awesome!)

However, as we realized once we were in Florida, Loxahatchee is a big, big, big place… and despite the internet, determining location of the visitor’s center wasn’t happening.

Eventually we figured out where the visitor’s center was, but not until we arrived. Locations of birding locations in Loxahatchee.

So we figured out how to get to the Boat Launch, which we learned was a boat launch after we got there. Ah well.  There were still birds to see.

We saw Monk Parakeets which would have been exciting if we weren’t from Bergen County in New Jersey where we have our own flocks of devout parakeets. Zillions of Black Vultures loomed overhead, which was peculiar because we had only seen Turkey Vultures up until this point.  But the looming wasn’t menacing because the Florida winter sun is so bright and cheery.

Anhingas are more common than Cormorants here.  We were trekking determinedly after a coy American Kestrel, when I caught site of this one hanging out on the side of the slough.

Then, I got distracted by a butterfly wherein the internet redeemed itself.  I’ve been able to identify all the (two) butterflies I’ve looked up so far with vague search terns such as “Florida butterflies” and “orange butterflies in Florida”. 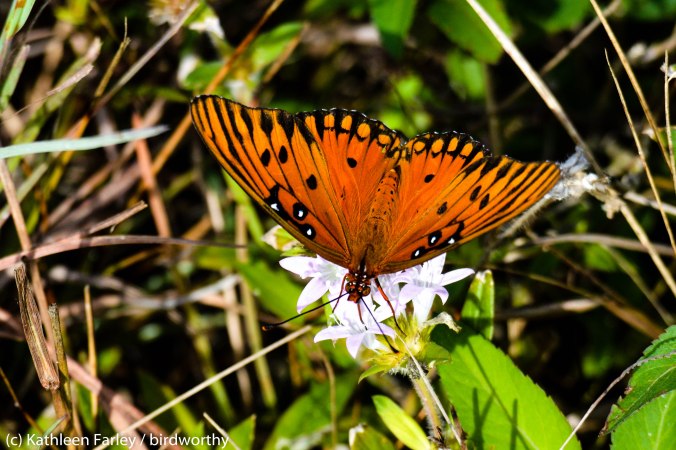 You can see everything but it’s tongue and….. moving on.

We eventually did make our way up to the coy Kestrel.  Although each time we approached, just as I’d get the camera set, he’d move back further.

Eventually it worked out in my favor as when I finally captured a reasonably respectable image, it was in a natural setting and not on a sign.

After that we opted to turn around so we could have a chance to try a site further north before heading to the conference.  We were heading back when we glimpsed a flutter of white and located two White Ibises.

2 thoughts on “Launching into Birding at Loxahatchee”