On a Tuesday towards the end of May I found a few free hours to run back up to Doodletown.  The day’s forecast threatened rain, so I hemmed and hawed most of the morning as to whether or not to go.

Eventually I decided a-birding I would go and arrived on site around 11.

It was a very different scene as this was a week-day morning.  Some operational work was taking place on the highway next to the lot which had a handful of cars – very different from the cars crammed along both sides of the road.

It was a quiet day.  I wandered slowly up the trail.  There is actually someone sitting in the graveyard – one of the new people I encountered (graveyard pictured bottom left).  There was also a large black snake that was at the graveyard as well.

The small, abandoned town of Doodletown actually boasts 3 cemeteries. Slightly bizarre, but when you consider the town survived for 200 years, maybe it’s not so strange.  The two photos pictured on the right show the road conditions.  Despite the fact this is a town, the buildings are gone.  I believe the state removed as many structures as possible when the town was closed to make way for the park.  Now only wildlife lives here.  Two of the other people I met here were researching ancestors who were buried here.  I was able to use my recently acquired knowledge to send them to one graveyard, then I found the other two. 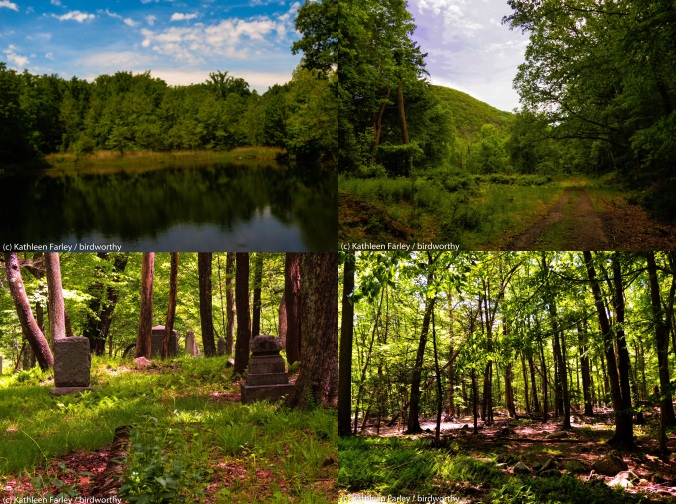 One graveyard was closed to the public (but the other two aren’t).  The road to that one is pictured bottom right.  When I was exploring cementary #3 (pictured bottom left), I began hearing the call of a Yellow-billed Cuckoo.  I tracked the bird up the road out of town eventually until I could also hear a Black-billed Cuckoo.  It seemed as though they were taking turns.  One on each side of the road, lost in the thickets.

When I was exploring the remains of the ground for one house, I saw a speck on the tip of a tree.  Certain, it was only going to be a piece of shredded bark, I made myself view it anyway through the binoculars and found a new species for the year: Ruby-throated Hummingbird.

Not that you can tell it has a Ruby-throat from the photo.   Continuing down the road, I was hoping to find Pease Pond.  Since there were no cool herons in the large pond, I hoped perhaps they were taking refuge in a more secluded pond.  Pease Pond is fully overgrown now, but there was more active birdlife in the area.

I heard a call I was fairly certain was a Pileated, and then had my suspicions confirmed when it flew overhead.

Proof of the Pileated Woodpecker. Doodletown, NY. Photo taken May 27, 2014.

The clouds were beginning to roll in.  So perhaps that’s the reason I was finding more birds.  I next stumbled across a flock of song birds in and out of the trees as well as another view of the Ruby-throated Hummingbird. I had Cardinals, Blue-winged Warblers, and Hooded Warblers in and over the trees along the road. 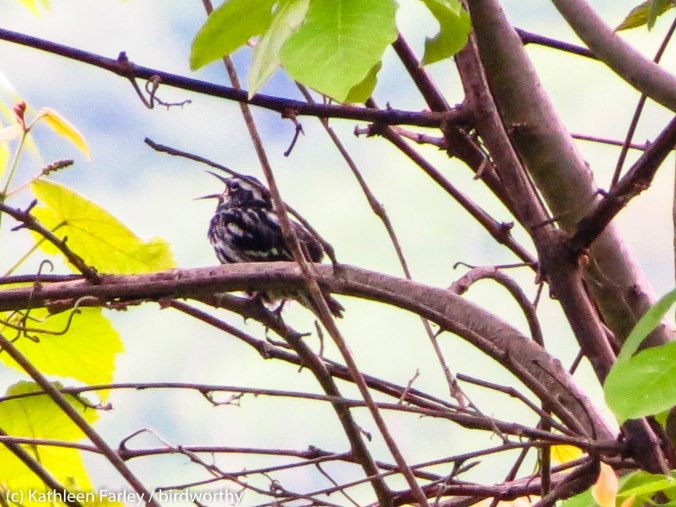 Black-and-White Warbler sings something not so blue. Doodletown, NY. Photo taken May 27, 2014.

Heading back to the car towards mid-afternoon, I stopped to follow one more beguiling pathway, because that’s what one does.  Along it I heard a series of jumbled notes, and looking around this caught my notice: 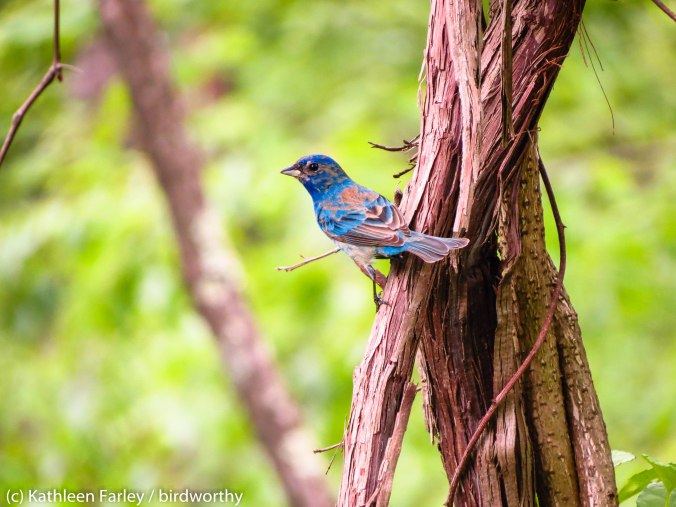 As I watched him sing, I was certain I’d remember the song, but for the life of me, I cannot recall it.  Maybe I will when I hear it again.

However, trip #2 to Doodletown was lovely!  I heard or saw 40 species all together which I am pleased with considering I was birding from 11am-3pm.

2 thoughts on “Return to Doodletown”