Whee! It’s been ages!  I’ve not had a chance to do much birding this summer!  I’ve been working full time, running the summer camp, researching and contacting ph.d. programs, and getting a second job.  I’ll be adjuncting at Essex County College this fall.  So all of that leaves me little time for birding, and less time for blogging about birding.  As a co-worker pointed out, “It’s funny: the more work at a nature center I do, the less birding I’m able to do.”

So this morning we decided to remedy this.  Three of us from work met up at the Tenafly Nature Center at 7am to do some pre-work birding.  (Because trying to bird with a trail of children behind you just doesn’t work.)  Two of us are experienced birders and the woman who joined us is growing an appreciation for it.

She was running late and I had to split out earlier, so it worked out well.  It’s hard to be the beginning birder with two more experienced birders as you are forever missing sights.  So when I ducked out the balance became better and she could pepper him with questions about the sightings.  Three is an awkward number, even if it is company.

We had mostly common sightings.  We found a roost of Mourning Doves: 30 in a dead tree hanging out with one fledgling American Robin.  We had a good viewing of a red-eyed vireo.  More than a silhouette through trees.  How awesome is that?

Heard the electronic melody of the Wood Thrush to the drumming of the Pileated.  That was pretty neat. In fact, we did well on woodpeckers: Pileated, Downy, and Northern Flickers.  I had two on my way back to the center that I believe were juveniles.

But best of all was presumably the six Green Herons hanging out at the pond.  Clearly the young have fledged and they all hang out in the spadderdock now.

Children in the forest aren’t all bad.  It’s how they develop an appreciate for nature, and activities like hiking and birding which hopefully will remain with them for their whole lives.  On this particular afternoon, we had the kids bring their lunches into the forest to eat in the shelter’s they’ve spent the week building and the four of us running the camp had a lovely picnic on a real blanket while the children played like children should.

The last week or so has been exceedingly busy.  Both my parents retired.  My sister and I organized a retirement party for them at the house and we did pretty much all the food preparation ourselves, so there was plenty of cooking and cleaning.  Then, we had family over to stay from out west.

However, on Wednesday, I did find some time for myself.  Wednesday evening, near sunset I decided to take a walk around the neighborhood.  My folks were at a retirement party and it was between thunderstorms.   Wasn’t birding, the intent was just to get some fresh air.   Just passed the townline I heard some unusual bird calls.  I was hoping quail (hope is ever eternal!).  When a lumbering vehicle drove past, it caused me to stop and listen more closely.    That’s when I realized the calls were coming from under my feet. 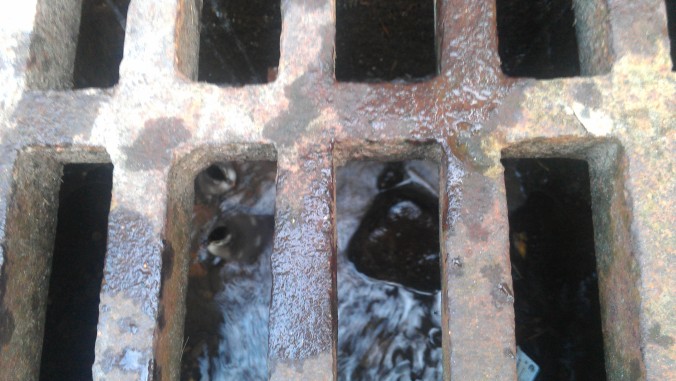 Ducklings trapped between the grating of a storm drain.

Three or four baby ducklings had washed down the storm drain and were swimming in the underground stream of storm runoff.  The mother duck was in the woods, frantically calling.   Heedless of the danger to myself I dropped to my knees and crouched at the side of the road where little shoulder existed on a blind bend.  The ducklings were doing their best to scale the sides of the drain, but having webbed feet rather than claws was preventing success.   I tried reaching in through the grating to scoop them in my hands and guide them upward, but the spacing of the grating preventing me from getting much past my wrist into the drain.   One little duckling made it to the bars, slipped before I could catch it, and fell back to the water.

I abandoned the walk and flew (if only!) back home to assess what duckling rescue equipment I had available.   Conclusion: I clearly need to assemble better bird rescue equipment.   I came up with a bucket (to hold the ducks), jewelry twine for lowering equipment through the grating,  a plastic basket pencil case I hoped would fit through the grating, and a plastic bag in case it didn’t.

I drove my car back to the site so that the car could shield me as I set to work.  As I pulled up, my headlights found one lone duckling standing on the white line of the road, with the same bewilderment seen on a face after emerging from some shelter after the storm.   When I parked, the duck turned and fled into the forest where the mother duck welcomed the wanderer back into the fold.

The plastic pencil case was too wide and inflexible to fit into the grating, so plastic bag it was.   I tied a stick to the bag in order to not lose the bag.   I put stones into the bottom of the bag to sink it into the water.  Conclusion 2:  I need to learn to speak duck, or universal bird language because the ducklings wanted no part of this bizarre contraption.  In fact they fled further into the storm drains.

One brave duck returned and bravely attempted to climb the sides again, even using the plastic bag and stick I provided for additional support.  As it neared the top, I was able to reach in and scoop it to safety.  I placed it in the bucket which it perceived to be Torture Round #2 until a time when it was safe to release it. 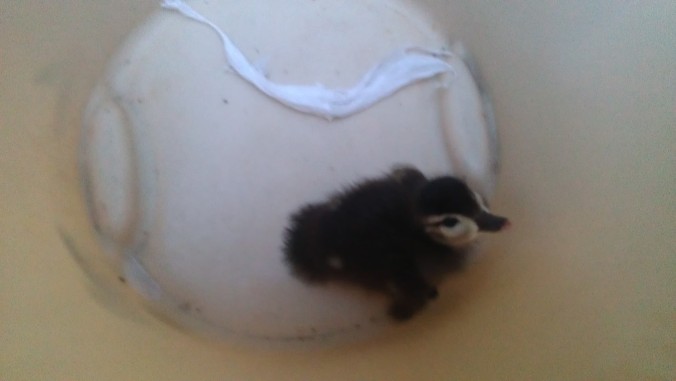 Now there was one last duckling, pitifully swimming around as night drew around us.  Having assessed the up did not work, this duck began exploring the canal looking for alternative means of escape.  I attempted to follow up above ground.  I would run to the next opening, peer in and listen.  Running back towards home, I accidentally spooked the mother duck off her nest as she raised her alarm cry when I drew near. At one point, I heard the little duckling approaching, but as this site was more challenging. I clapped and clapped to scare the little duckling back up the canal. It returned twice more to the first site, but had no luck scaling its way out and I had no luck with my stone-weighted plastic bag.  I played the call from all about birds hoping to draw it back.

I was here for nearly an hour, warily watching the traffic that sped past me, no one stopping, no one caring.  Not one word from the cyclists who biked by; not an inquiry from people out for evening strolls, much like I had been.  A cop car pulled near, watched a moment, turned around, and headed back to town.

Finally, night arrived and the little duckling fell silent.  So did all the other ducks.  With nothing more I could think of to do, I headed home.    Early the next morning I returned, and searched the gratings.  But I could see nor hear the little duckling.  Its fate unknown: Did it find its own way home?  Did it sail off down the storm drain and into the creek to have adventures on the high river?  Did a raccoon or some other critter have an appetizing meal?